December 2022 – Al Barbagelata A man with love for people

Al Barbagelata is one of the employees who has dedicated almost 40 years to Nor-Cal Beverage. Al is an outstanding leader and a loyal employee. Al oversees our Equipment Solutions department and has been a huge contributor to the department’s success. As part of this month’s Employee Highlight, we wanted to share Al’s story with his friends and co-workers.

Al was born in Reno, Nevada. When he was a child, his family moved to New Mexico for a couple of years then later moved and settled in Galt, California in the early 1970s. Al attended and graduated from Galt High School. Al always loved working with livestock and worked part-time helping local farmers while in High School. In the Fall of 1979, Al relocated to San Luis Obispo, California, to attend California Polytechnic State University. After a few years, Al decided to leave the university and join the workforce full-time. He moved back to Reno and started working for TelePrompTer Corporation. Al started with the construction crew. The department mainly built underground television and cable infrastructures. Al was later promoted to supervisor.  He worked there for a few more years until he decided to move to the Sacramento area where he began working for a local farm.

A close friend of Al’s worked for Nor-Cal Beverage and Al heard great things about the company. Al asked his friend to let him know if there were ever any openings. Al married in 1983 and while on his honeymoon, he received a call from his friend letting him know that Nor-Cal Beverage was in need of a driver. Al cut his honeymoon short and headed back home for an interview. Al was hired in May 1983. Al started off as a route driver delivering Dr. Pepper and Double Cola, and later RC Cola to local retail outlets in the greater Sacramento area. By the late 1980s, Al moved to the Food Service Department as a route driver. The job was more of an “on-premise” job. Al delivered the same products but in syrup form to bars, restaurants, and convenience stores. By the early 1990s, Al was promoted to a sales representative and introduced the department to new business partners. There was a lot of competition from Coca-Cola and Pepsi during that time. In order to be successful and gain customers, Al and his team had to provide better customer service than the competition. “That was our mission and goal, to provide the best customer service possible”, Al said.  The department became very successful and eventually partnered with 120 local 7-11 convenience stores in the Sacramento area. By the mid-1990s, Al became Assistant Department Manager and by 1999, he was named Department Manager. By early 2000, the department expanded to the San Jose and Reno areas and worked with 500+ 7-11 convenience stores.  By 2010, the department rebranded and changed its name to Equipment Solutions. Today, Al still holds the title of Equipment Solutions Manager.

Al has enjoyed seeing the department grow and be successful. “It’s been a fun ride, watching everyone grow and the business growth, it is what has made it worth it”, he said. Al also enjoys the job and the people he works with “I like the people and the Deary family”. Al feels lucky to be able to work with all the Deary family members. “I feel fortunate to be able to know them on a personal level and be able to work with Grant and Don and now Shannon, they are very special people”, he said. The Equipment Solutions department can be hectic at times, but Al said there is always something new every day. “Just when you think you have seen it all, there is something that comes up, whether it’s good or bad, it keeps things interesting”, he said.

Equipment Solutions works with a huge cross-section of people from different backgrounds and cultures. Al mentioned he enjoys his job because he gets to work with a diverse group of people. “People are interesting, and I am fortunate to be able to work with a lot of different people”, he said. Al admires his parents because they engrained the value of getting to know diverse groups of individuals and other philosophies in him. “Another thing they taught me is to treat everyone as an equal and no one is better than the next person”. As a child, Al always looked at the brighter side of things. “When you think something is really bad, it can be a lot worse and it really puts things into perspective”, he said. Al continues to follow these values and philosophies to this day.

Aside from working, Al likes to spend time with his beautiful family. Al re-married in 2018 and has two children and a stepdaughter who recently graduated from nursing school. In addition to enjoying his family, Al cares for his sheep and his orchard. “I have 25 acres of almonds and 50-75 sheep”, he said. Al spends most of his free time taking care of his farm. “It takes a lot of my time, and I am always busy, but I enjoy it”, he said.  Al used to race boats and still loves high-performance things like his hot-rod cars.

Nor-Cal Beverage is thankful for all the hard-working years Al Barbagelata has given the company. He continues to push his department to new heights and successes. We are truly grateful and fortunate to have an employee like Al. Thank you for your continued hard work and dedication to the company. We appreciate everything you do for Nor-Cal Beverage! 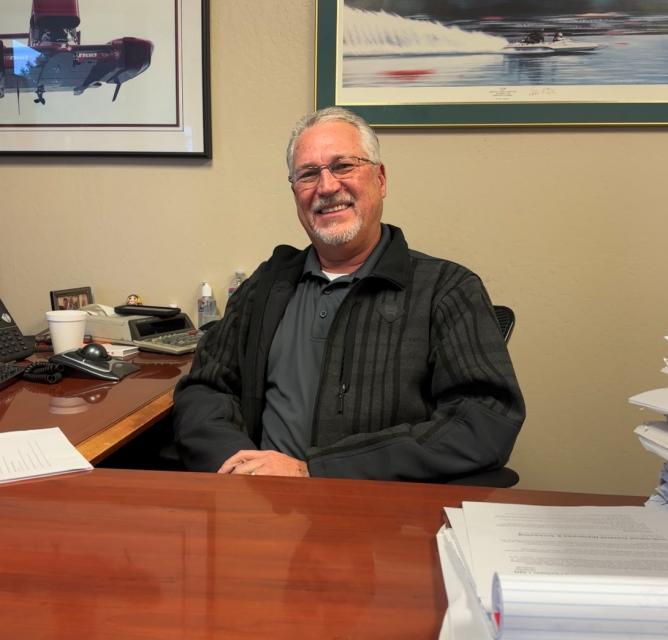